Without making more noise than the emitted at his shows and by not overshadowing Saint Laurent’s star, the designer has created the way for a long-lasting role as creative director. 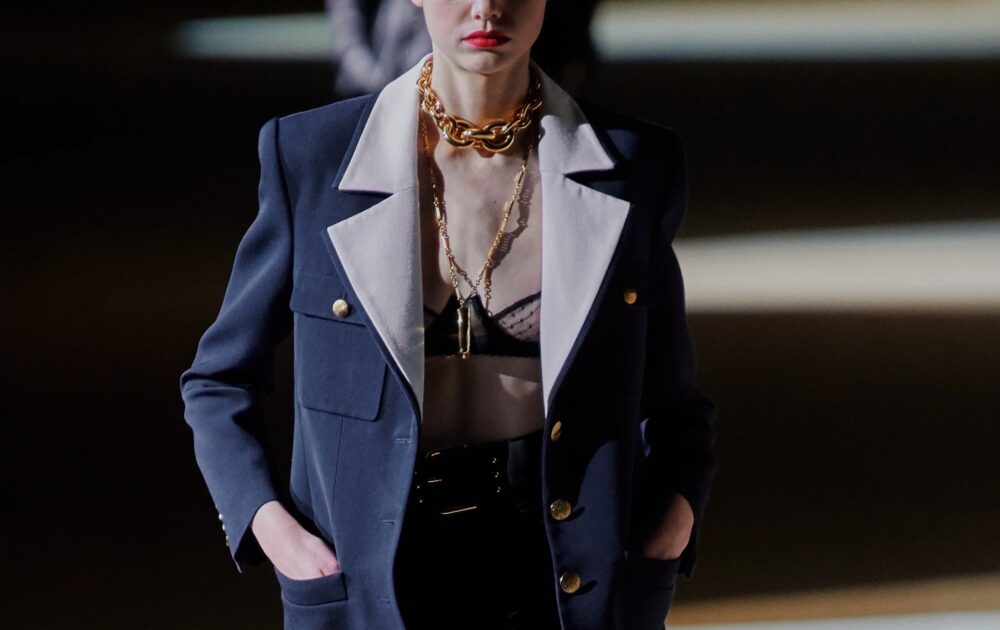 Rumors circulated for months. Performance was questioned, quality and motivation were in doubt as well. Some voices pointed to a no renovation scenario, others to the infamous metaphor of “letting go”. Names of possible substitutes were heard. It is fashion we are talking about, not football, although both industries work in a similar (let me say it again) fashion. We are back in April 2016 and the star player the rumors are about is Hedi Slimane, the man who has been defending Saint Laurent’s colors for four years at this point. It is not our mission to remember all the achievements of the French designer’s career but it will help to note that since 2012 he had changed the name and aesthetics of the house to the point of erasing any trace of Stefano Pilati’s (2005-2012), Tom Ford’s (1999-2004) and Alber Elbaz’s (1998-1999) tenures and multiplied the sales as if he had discovered a magical formula to be the first in reaching the sold out status. By the point when Slimane’s departure of the house was official, it was unofficially known that Anthony Vaccarello, a 36 year old Italian-born Belgian-bread designer who had his own brand and was leading Versus Versace back then, will be Saint Laurent’s  creative director. The man was the perfect match but an unlikely one too. Francesca Bellettini, CEO of the house since 2013, said after the announcement that she didn’t considered any other names as she was tired to see Vaccarello’s name by Saint Laurent’s in magazine credits. Vaccarello’s look, extremely short and extremely sexy, fitted the spirit Slimane had infused the maison with. If that wasn’t obvious from the outside it was only because Anthony Vaccarello wasn’t exactly star designer material. Thank God.

Instead of a radical rupture, Vaccarello brought three aspects that have been present ever since: sex, the editorial hit and the subtle reference to YSL’s archives

His debut wasn’t, let’s say, all “oohs”, “aaahs” and fireworks. There weren’t “Pows!” or “Kapoofs!” as in the 60’s Batman series (the kind of reaction someone expects when hiring Matthew Williams, for example, to lead Givenchy) although in the benefit of spectacle there was a 32 foot logo hanging from a crane in the brand’s headquarters at rue de Bellechasse, the place where that first show was staged.

Instead of a radical rupture with Slimane’s work, Vaccarello brought three aspects that have accompanied every collection since that first one: sex (there’s no way you could picture Slimane’s teenager having sex, or at least properly having it), the editorial hit (back then it was the YSL heeled shoes) and a subtle reference to Yves Saint Laurent’s designs (a leopard print dress from the July 1982 collection in that occasion). The Vaccarello era had started but the audience was somehow cold and the press dubitative: while the French applauded, international editors weren’t so sure. “What was added to the YSl archive?”, Suzy Menkes wrote. “Bad taste. […] But surely he should follow a different aspect of the rich YSL archive next season. No bared bosoms perhaps? What was shocking In the era of Yves, is now a big fashion yawn”.

Vaccarello has created an unusual path for designers nowadays: instead of debuting at his highest level and decreasing over time, he hasn’t stopped improving

The fashion industry tends to forget many things, specially that the most relevant part of a story is the end, not the beginning. With the twelve collections that have followed that first one, Vaccarello has created an unusual path for designers nowadays: instead of debuting at his highest level and decreasing over time, he hasn’t stopped improving. Even when it felt that he was misstepping (it happened during the first part of his Fall/Winter 2017 until crystals made their appearance and his Spring/Summer 2019 was heroically saved by the tights and bodies from the finale in the same way), he wasn’t. He has found the formulas for a long-lasting career for a designer and a long-lasting appeal for a brand, because Saint Laurent’s look is along the most coherent of the market. You can wear the SS18 embroidery tops with the Resort 2020 smoking and last winter’s structured coats with next one’s latex pants (they are, by the way, the best latex pants ever seen on earth). They don’t fell old and no one is tired of them. Even more important: the designer doesn’t seem burned or tired. Well, maybe the most important is that while he has been building his way -hand in hand with Bellettini, of course-, the brand’s results have kept growing every year, overcoming the 2€ billion  mark in 2019.

Saint Laurent’s last announcement, the news that the brand will ignore fashion’s traditional calendar of seasons and shows for the remaining part of 2020, was proof of Vaccarello’s will to continue working in his own project minding only his own business. And that is of the smartest ways of conducting yourself in life.

George wants to be my sugar daddy